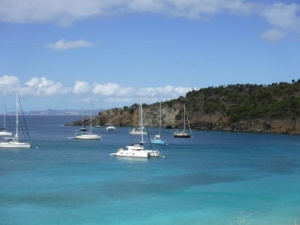 On the way to Antigua we decided to stop for a couple of days in Sant Barthelemy, St Barth, that is East of St Martin. In 1784 the island was given as a present by the French king Louis XVI to the king of Sweden Gustav III, from whom the name of the capital, Gustavia.  Late in the 19th century France bought back the island, resulting in a mixed Swedish and French character of the place.
Today it is a dependency of Guadalupe.

One of the many turtles

We moored at a buoy in Baie du Colombier where we had our first encounter with multiple sea turtles and rays. In fact, while we were still approaching the buoy to moore we saw a few little turtle heads emerging from the water. Right after completing the mooring we immediately jumped in the water with our snorkeling equipment on, and we could admire several turtles and rays slowly moving on the bottom, as well as lots of colored fishes.

We went by dinghy to Gustavia, about 2 miles away, to complete the custom formalities. The city and the little harbour are beautiful and fashionable. The streets are organized in an orthogonal structure, named after both French and Swedish names.  In such a small town there is an incredibly high concentration of luxurious shops; the most famous fashion brands are represented here. We had a very enjoyable stop for an ice cream and bought delicious baguettes at a local boulangerie.

The day after we walked from the Baie du Colombier to a small village near by, in front of Anse Paschal, where luxurious villas were lined up on a beautiful, white sand beach. We got a confirmation that this is a place for a few, very very wealthy people.

We certainly will keep very nice memories of St. Barth.

One thought on “St Barth”