On November 14th at around 4:00pm we completed the passage of the Panama Canal and disembarked the pilot and the added crew. Since it was still early in the afternoon we decided not to anchor at Las Brisas, the large bay in front of Panama, bur rather continue to the Isla de Taboga, a few miles South of Panama, where we dropped anchor at sunset.

Taboga is a small, cute island used as a weekend spot by the Panamanians. Unfortunately you can see not too far all kind of cargos and oil tankers which take away a bit of the feeling of an uncontaminated place. 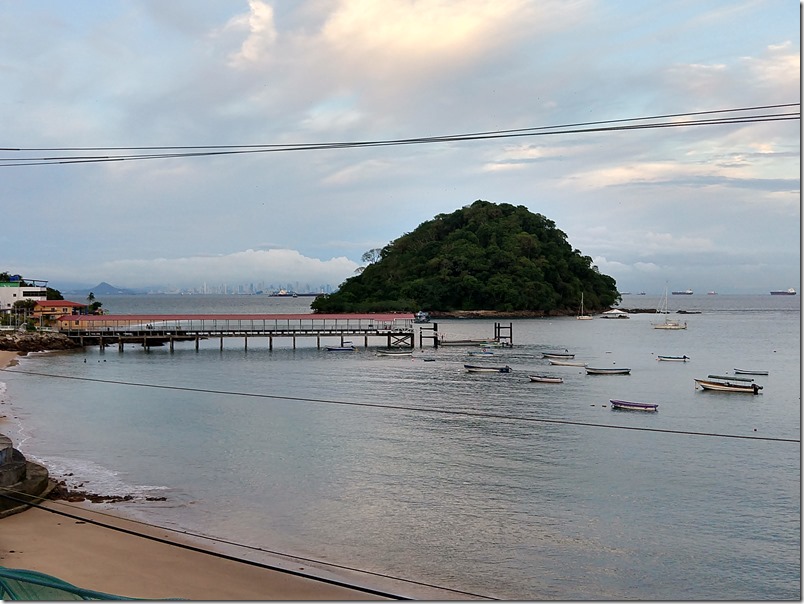 Therefore, the day after we decided to head toward the Islas Las Perlas, that is an archipelago of nearly 250 small islands, most of which still uninhabited. The name originates in the Spanish colonial period for the great amount of pearls found around these islands. We motor sailed (no wind!) about 40 miles to reach Contadora, that is the most touristic island of the archipelago, featuring a small airstrip and many luxurious villas. The island of Contadora became famous when the Shah of Iran retreated there in exile. We anchored on the South side of the island; the next morning we had our first experience with the Pacific currents due to the tidal excursions. Gemma took a swim and immediately realized that though she was trying to swim back to the boat she was not making any progress forward. Fortunately Sergio was still on board and with the help of a line and a lifebuoy he could easily retrieve her back on board. It was a great lesson learned!

We landed on Contadora by dinghy to make some provisioning. The island is not huge, but long enough to appreciate the nice attitude of the local people who gave us a ride both ways into town and back by kind of golf carts.

The following day we explored the nearby Isla Bartolome’, a very scenic place where hundreds of birds (pelicans, fregata magnificentis, seagulls, cormorants – to name some)  entertain complex interactions within and between species. For example, we saw a group of fregatas nastily attacking and persecuting a poor seagull that had no choice than rapidly escape. This was the first time we tried the brand new wheels that we were recommended to add to our dinghy once in the Pacific. In fact, due to the high tides, the beach can become very long to transport the dinghy/engine that all together weight about 70 Kg. Unfortunately, this wonderful addition contrasted with the poor dinghy whose life was about to its end. In fact, although we stored it in a locker in Shelter Bay to prevent the sun to deteriorate it, the tropical heat still caused the PVC material of the dinghy to unstuck in several places.

The following day we went to Isla Chapera where we felt quite unwelcome as soon as we tried to land with the dinghy and we were approached by some barking dogs and three armed soldiers who ordered us to leave immediately as that area was off-limits. Needless to say, we felt compelled to obey. We went to Isla Boyarena, a little gem which disappears with the high tide and becomes a huge dune of white sand at low tide. 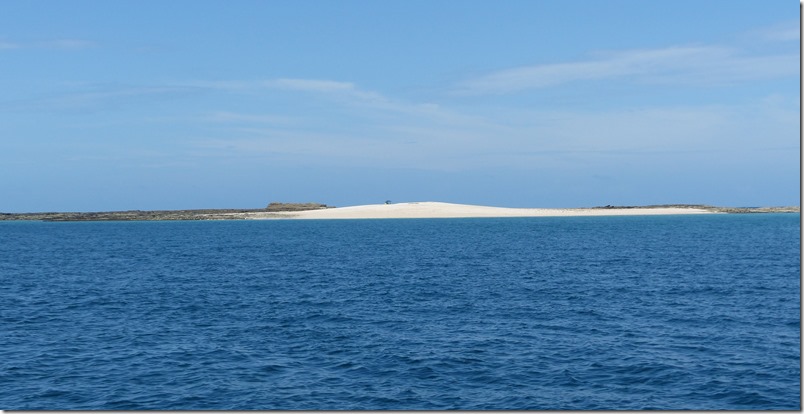 Here we had a disappointing accident. While we were raising the dinghy to try some extreme intervention to repair it, one of the two wheels felt in the water and in a matter of seconds it was out of our sight due to the strong tidal current. All efforts we made to rescue the wheel were useless. We knew it was floating somewhere, but after more than one hour of research on a semi-deflated dinghy, we decided it was time to take a turn. In a mixture of feelings between disappointed and sad, we came to the decision it was time for a new dinghy. We spent the following day at Isla Mina searching  internet and posting entries in forums to make an informed decision.  We found out that the only place where we could source a new dinghy was in Panama, so with the wind in our favor we quickly sailed back the 40+ miles that separated us from Panama City. 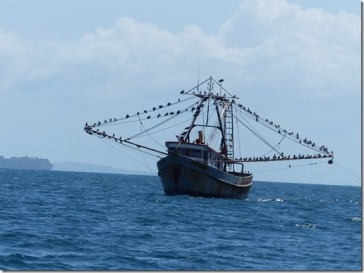 November 26th – Back to Panama

Choices were limited, and basically the only dinghy available that would fit our needs was a Caribe dinghy with a fiberglass keel, 2.5 mt , 45 kg, manufactured in Venezuela. Believe it or not, the first hours with the new dinghy were a nightmare. In fact, one of the chambers was deflating after a few hours!!! We brought it back to the shop ready to ask for our money back… fortunately it was just a valve that was not properly lubricated!

November 30th – Back to Las Perlas with two dinghies

With the new Caribe dinghy and some disappointing adventures behind our shoulders, we headed back to Las Perlas going through Isla Otoque, an island where the Smithsonian Society has established a research center for the study of the birds. From there, on November 30th we headed to Isla Pedro Gonzales, the third largest island of Las Perlas acrhipelago, where a luxurious marina and villas were recently built. We then sailed to the west side of Isla Bayoneta, that is famous for its long white sand beach full of small cowries (cipree). 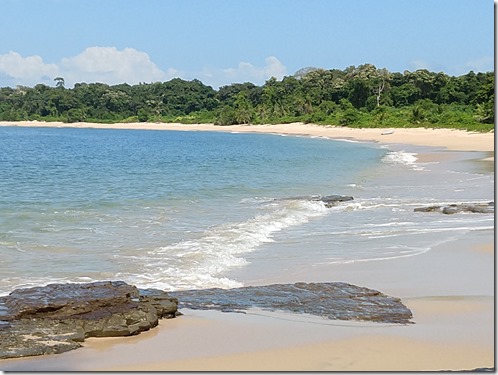 We made the next stop at Isla Viveros, where we spent the night, before circumnavigating it to  get to the village of San Miguel at Isla del Rey. While the most populated of Isla del Rey, this is an extremely poor village, where we could barely find a few apples and eggs to buy. Even staying at the anchorage was not very pleasant, so we decided to leave and spend the night on the north east side of the island, were we found a beautiful and sheltered spot. 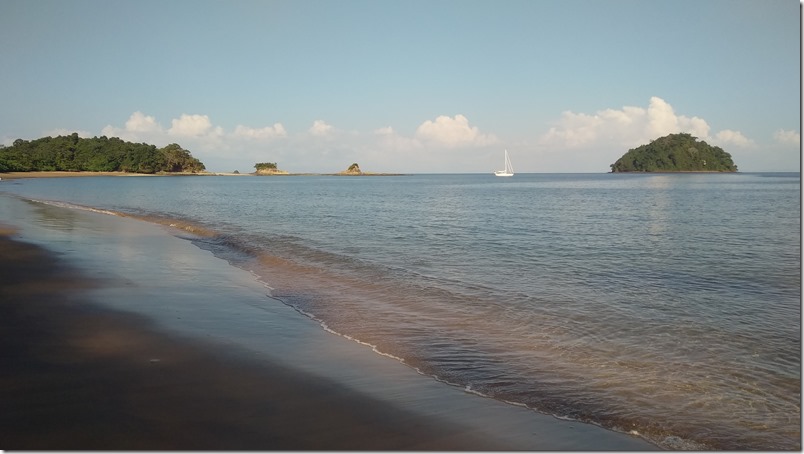 On December 3rd, we started heading south. We stopped at Ensenada, a tiny, colorful village, where people sustain themselves by fishing and harvesting fruit and vegetables on the hills of the island.

In the afternoon we enjoyed passing by the island of San Telmo, getting for the night to an anchorage in a bay in front of Rio Cacique.

Here we encountered  three teenagers who approached us to sell fish freshly caught with their nets. Our plan for the day after was to navigate up the Cacique river that was advertised in our guide as a great place. Unfortunately, the next morning at 10:00. when in our mind the tide should have been at the perfect level for entering the estuary, we found no river! It was clearly too early and the estuary was still fully covered by the sand. Since we spent the night fighting the mosquitoes and the no-see-‘em, we decided it was time to start heading north west. After a short stop at Isla San Jose, at 4:00pm on December 4th we started the 80 miles crossing of the large Panama bay. 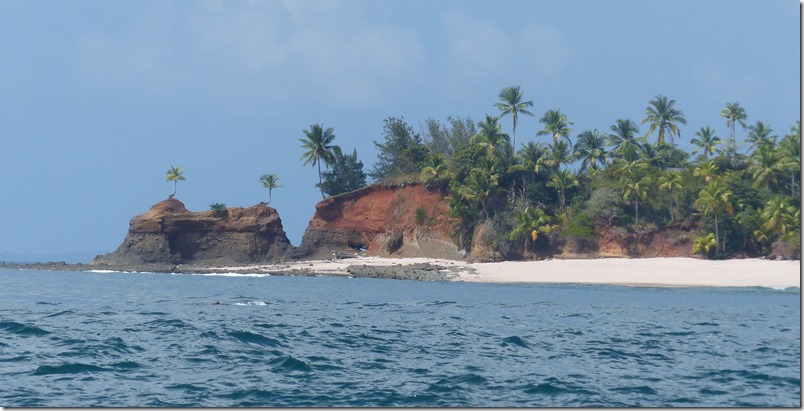